(Note to reader: In this section there are two people, both named Wouter. One lives in Amsterdam, the other in Antwerp.)

After much preparation, I had all my belongings loaded into two large cardboard boxes, and a carry on bag. This was merely routine for Wouter and Hein as they have done this dozens of times. For me it was tedious and full of uncertainty. I had never disassembled the new bike before. Though Dana had gone over it once with me in the shop, I still had to make one call to Dana during the process.

Cherissa and I drove all the equipment to the airport in ‘Moby’, the great white goat transport wagon. Wouter and Hein took BART and met us there (Moby had not enough seats). This was the easy part.

When we finally arrived in Amsterdam, Wouter and Hein got in the fast passport control, as they are EU citizens. When I finally caught up with them at baggage claim, they already had all their bags. Hein pointed out that one of my two boxes was already there, and that they would meet me on the other side of customs for a beer.

I waited for about an hour for my last box. Wouter and Hein texted me that they must catch a train to Antwerp, so no beer unfortunately. I filed a claim for lost luggage and caught a Taxi to Sam and Wouter’s place in Amsterdam.

It took three days for KLM to bring my bike to Sam and Wouter’s place. Fortunately, Sam and Wouter are very generous hosts and told me I could stay as long as needed. They introduced me to their new addition to the family. 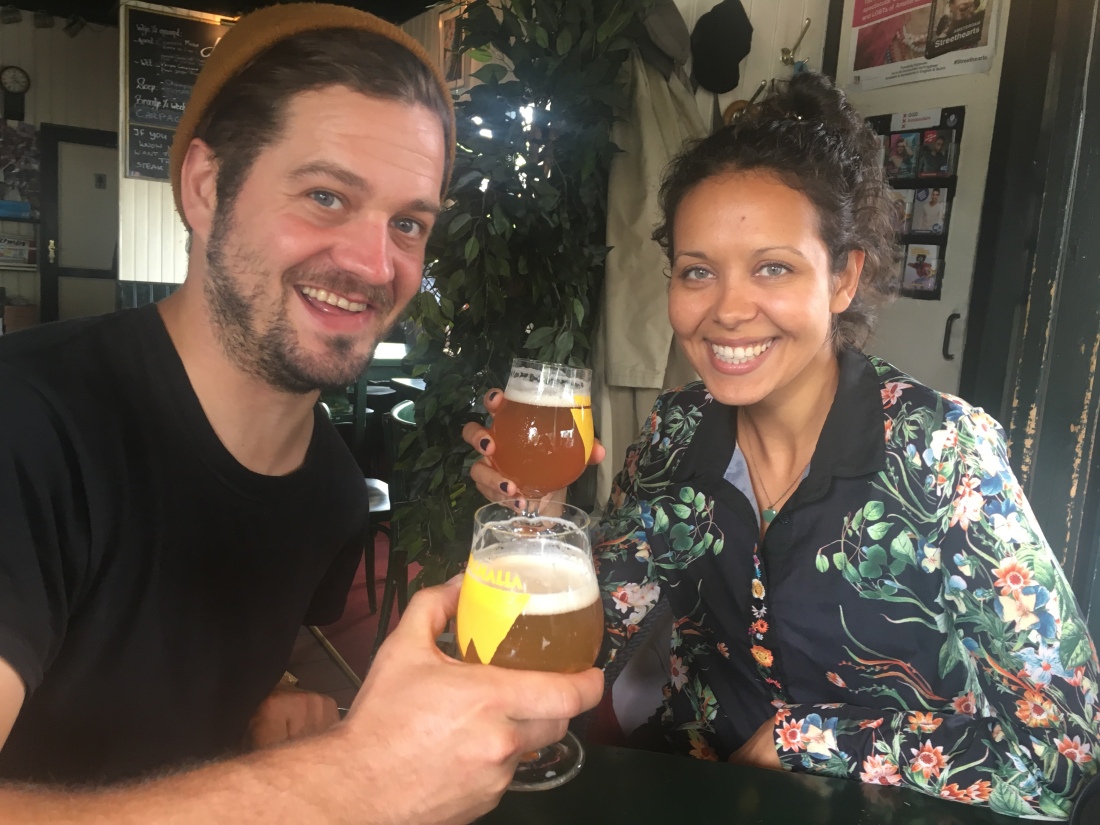 Fritz is a Turkish rescue dog that is brimming with love. He spent 4 years in a Turkish shelter for dogs, and now lives with Sam and Wouter. He shows his appreciation by quietly pressing his shoulder to your hip at every opportunity. Considering his past, he is remarkably Zen like. His steady reassuring way helped me stay calm about my missing bike.

Friday afternoon we visited the Rijks Museum in Amsterdam. They are restoring Night Watch, a famous Rembrandt. We were also impressed by the Angry Swan. It’s amazing that they can get this animal to pose like this.

On Saturday the four of us drove south to the town of Beers. Wouter’s mother, Sophia and stepdad, Emil have a home there. It was Sophia’s birthday. We had some car trouble on the way, so we showed up a little late. There was a big garden party already in progress in the backyard.

We made our entrance, fashionably late. I think this was Fritz’s first time there, yet the new surroundings and lots of people did not phase him. He jumped directly in the fish pond as if it was there for that purpose. It immediately got everyone’s attention. 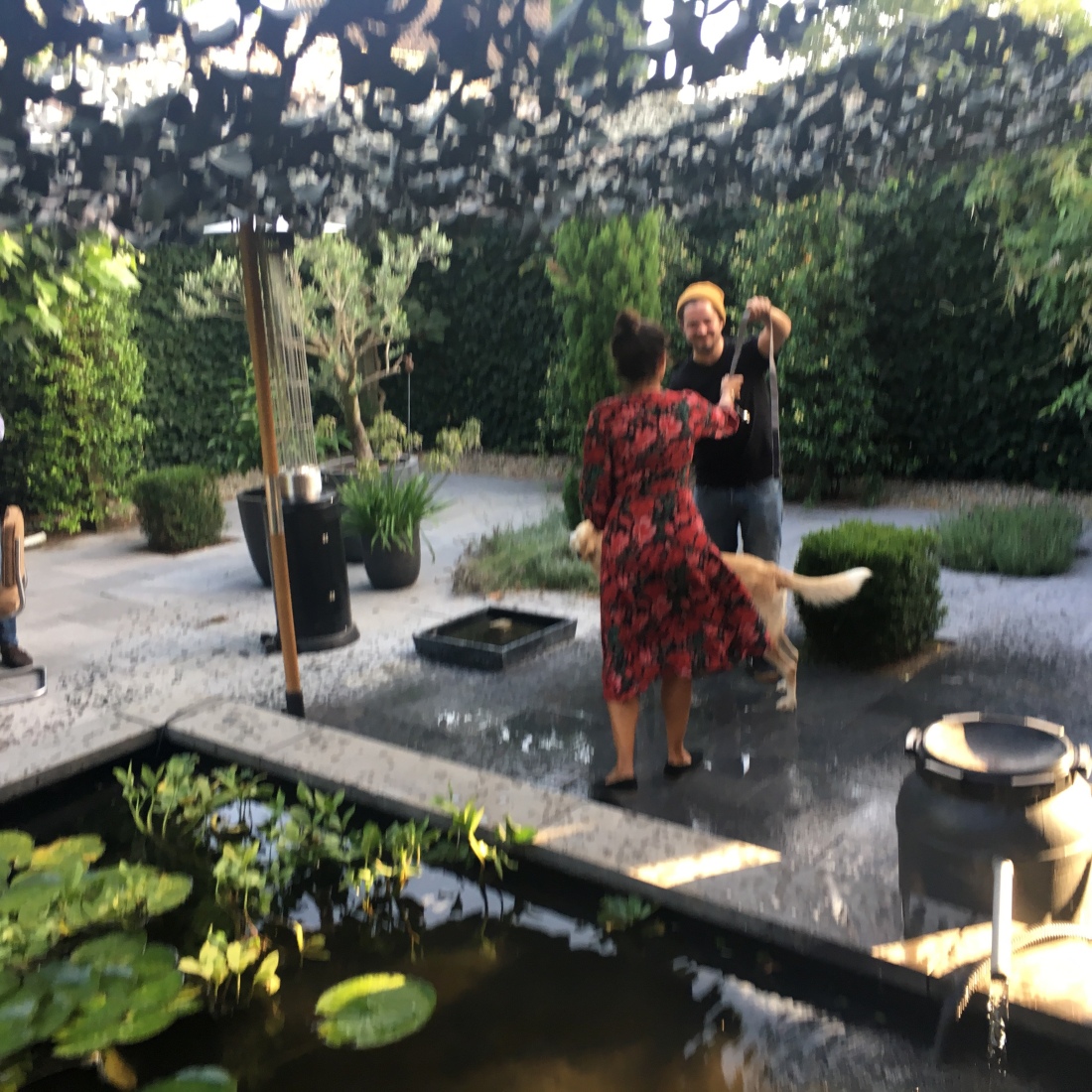 Wouter and Sam were clearly surprised and embarrassed. Fritz did a doggy paddle to the far end and climbed out onto the slate patio. Immediately someone appeared with a towel to dry off the dog.

Fritz got the party rolling well. Soon the pizza oven was up to temperature. Emil was well equipped to create some amazing pizzas for many hours. The party finally ended at 4am the next morning shortly after the last pizza came out of the oven. The adults all spoke fluent English and I enjoyed getting to know many of them. Emil is a mechanic for the Dutch Airforce. He had many stories to tell. Many of the children practiced their English skills for me.

We spent the night at Sophia and Emil’s place then on the return trip to Amsterdam, we stopped in the town of Woudenberg. Woudenberg is a small town in the Bible Belt region of Holland. It was Sunday. Most of the stores were closed. We stopped for a bite to eat and went to a nearby historic monument, called Pyramide. This was built by one of Napoleon’s contemporaries. Apparently, the General had some time to kill so he had his men build this pyramid of sod, to keep them busy. 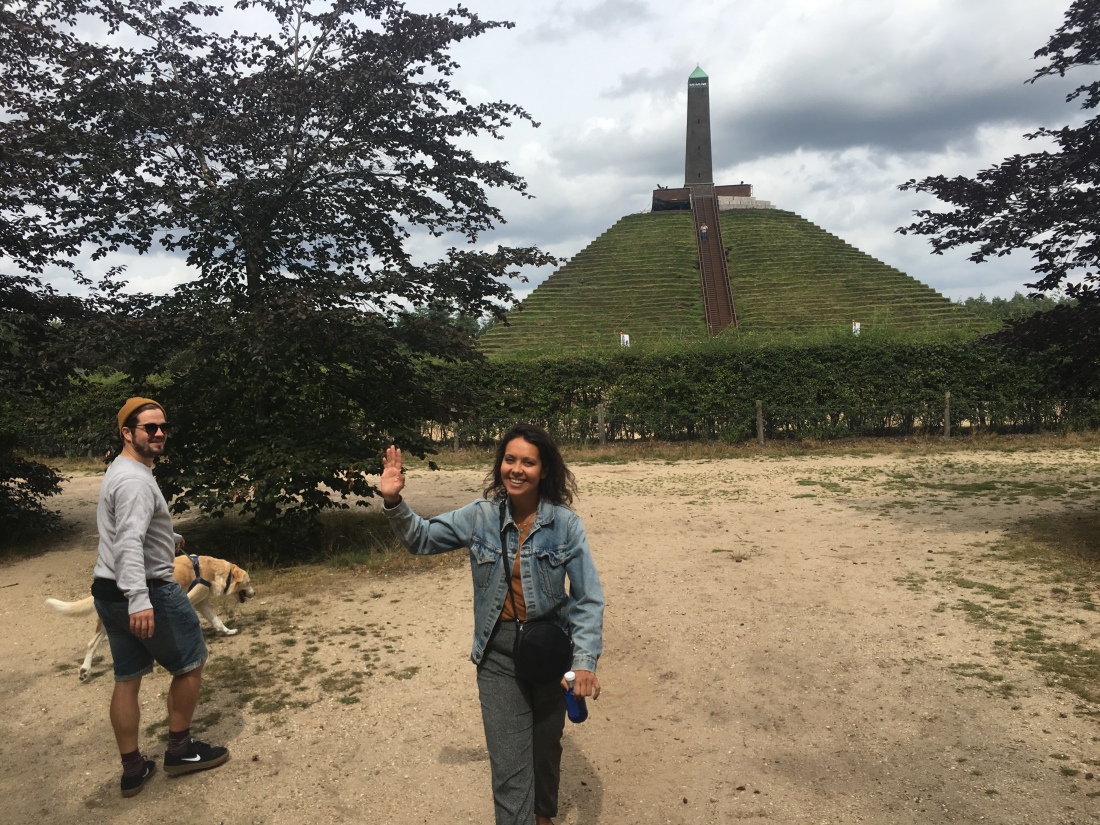 Preserving the sod monument requires considerable work which was on-going. We had fun making videos while we were there.

Late Monday night the bike finally was delivered. I finished assembling and testing it on Tuesday morning.

As I was leaving, Wouter pointed out that the forecast was for heavy rain for the next few days. With the delay, there is no chance of making it to Paris by Friday. I decided to address both issues by riding the bike to the train station in Amsterdam and taking a train to Antwerp.

Wouter and Hein live together in a large house in Antwerp. There are three floors and a basement. The top most floor is set up as an apartment with its own kitchen. It’s a great place with a wonderful garden in the back yard. They have lots of room for Warmshowers guests.

While I was there we had three other Warmshowers members join us. Wouter and Hein made dinner and breakfast for us. It was great to be part of the discussions which ranged from metaphysics, bicycles, and how to properly swear in Flemish and Dutch.

Hannah and Arie are students from Holland. They are traveling together, returning from Paris. They will start their undergraduate studies in Holland soon. Christian has dual citizenship (Canada, Holland). He has been cycling through the winter here in Holland and Belgium. He plans to continue touring as long as the money lasts.

Christian had many helpful insights on touring, including stealth camping in Europe. His rules differ considerably from the lesson I got from Gunner in California. Christian prefers to disappear from view, using bushes or a tarp. He waits until dusk to set up camp and breaks camp at dawn. He never camps on private land without the owner’s permission. Hannah and Arie also have had some experience with stealth camping.

I was fascinated with Hannah’s bike. It belongs in a museum. She explained that the bike she intended was stolen shortly before the tour. This was a bike that she borrowed and pressed into service as a last resort. We all applauded her courage. The bike had a Sturmey Archer 3 speed hub which was frozen in the highest gear. So she would walk the bike up the steeper hills she encountered. The brand name of ‘Juncker’ would probably present a challenge if it were ever marketed in the US.

It is really nice to get a tour of a city from someone who lives there. The insider’s perspective cannot be replaced by a professional presentation polished smooth by repetition. Wouter did well here. We could easily get from place to place on bicycles. From the top of the Antwerp harbor building, we got a good look at the city which is home to one of the world’s largest and most active ports.

Wouter brought me to a church in Antwerp where he once had an apartment that was somehow connected to the church. The photograph shows the church yard which was the view from the back window of his apartment. Wouter had the benefit of the church music several times a day. He said that when he lived there, the locals would use the church yard for barbecues and picnics after hours, with permission from the church.

Wouter explains that many of the old buildings in Antwerp were going to be destroyed and replaced by modern apartments back in the 60’s. Fortunately wisdom prevailed. There are many streets of well preserved buildings of history. Wouter also told me a story about how some of the priceless artwork was rescued from a burning church, by the neighborhood prostitutes during the war. I learned that Antwerp also has a red light district similar to Amsterdam. Though Antwerp is the diamond capital of the world, this is not really advertised to the casual tourist. August 15 is Mother’s Day in Antwerp. This holiday is connected with the church, as it also commemorates Mary’s ascension into heaven. There were many tourists in and around The Cathedral. Wouter and I got free entrance to the place as a result.

After a good tour, we met up with Hein at the Dragon for drinks and dinner at a nearby restaurant. We were joined by Anime (sp?), a long time friend of Wouter and Hein. We stayed out late. I got to test out my bike lights in city traffic on the way home. We got in about midnight. I set my alarm for an early start to the train station in the morning.

I use the term ‘Jump’ to make clear that I am riding the train, not cycling. Wouter and Hein tease me endlessly of being The poseur, because I’m claiming to tour Europe with my bike and not really pedaling it much. It’s a good natured ribbing, and I play into it by pointing out I have to wake early for my ‘training’ session tomorrow.

I woke and headed out to find that Wouter and Hein were also awake and preparing our breakfast at 6:20am. I was honored by this warm send off. The delay was well worth it. I made my first train with no trouble.

Because I wished to travel without disassembling my bike, I could not use the big TGV international trains. My travel to Paris required taking regional trains with many connections. The ones I used looked newer and less decorated than the one in the photo. They also ran on time unfortunately. I just missed the connection in Amiens, FR. I needed more time to perfect my technique of bouncing the bike down the stairs to the Voie (track). It only cost me 2 hours delay, and now I have a new skill.