Following the plan to head south along the Rhine into the Black Forest, I find it is relatively easy to make one hundred kilometers per day. The road is flat and navigation is not difficult. The scenery is also quite nice. 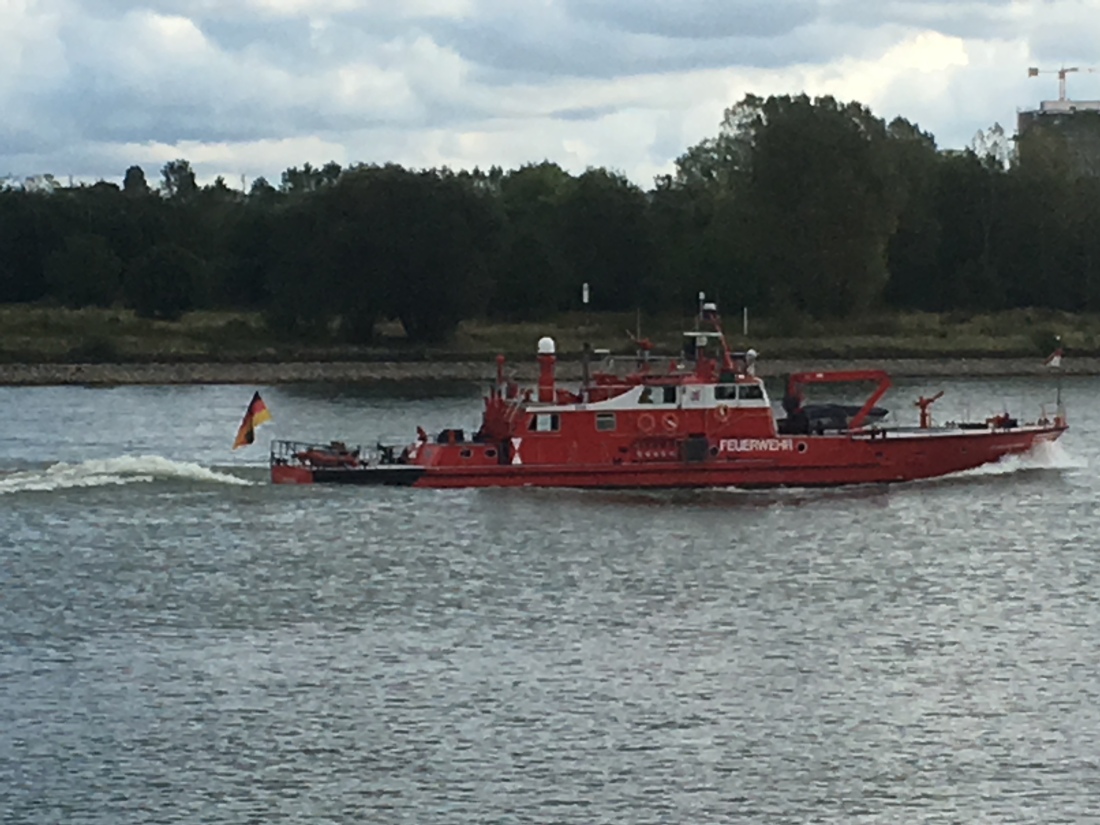 In Düsseldorf I had to find a dentist to fix a crown that had come loose. I was impressed with how easy this was to do. Without an appointment, and no dental insurance that would be relevant, I immediately got an appointment. The dentist looked at the issue and agreed to reattach my crown for fifty euros. With the receptionist, we spoke German. With the dentist, we spoke in English. The whole thing took ninety minutes or less and was handled quite professionally.

Heading south from Cologne, A cyclist zipped by me on the cycle way. I gave in to my racing instinct, and sped up to catch him. Staying within a meter of his back wheel, I could reduce my wind resistance and keep a faster pace than I could on my own. The rider was on a carbon frame racing bike with no luggage except a small pack on his back. We rode together for quite a ways when I came around him and we introduced ourselves.

His name is Christian. He started from his home in Holland that morning. He is headed to the Italian Alps to meet some cyclist friends. He travels two hundred and fifty kilometers a day on average. This average he can keep for several days without any problem.

Christian spoke German and English very well. I assume he also spoke Dutch. He grew up in a town not far from Woudenberg. His easy going style reminded me of our departed friend, Steve Purcell.

I followed Christian to his hotel just south of Koblenz. We ate and drank well. There we shared a table with a German couple from Munich, on vacation exploring the wine regions of Germany. I explained that I was fortunate to find Christian, as I probably would not have made as much distance without his help.

The next morning we left together, the plan was to make it to Speyer. When we left the Rhine in Bingen, the road became hilly and I was no longer able to match Christian’s speed with my much heavier bike. We parted ways.

I turned to Komoot to find me a way back to the Rhine. It took me through many miles of vineyards in the German countryside. I checked into a hotel in small town south of Mainz. It became obvious that small towns have cheaper hotel rooms than large cities. There I met another cyclist. A German named Markus.

He was on a five day trip, traveling by mountain bike. His English was pretty good, but I tried to keep the conversation in German. We wandered through the town of Nieder-Olm. We found a restaurant which was set up by local farmers. Markus explained that after harvest season, the farmers try to make extra income with this kind of restaurant. The menu is limited to typical dishes from the region made from locally harvested food. The food was good. We also went to a wine bar nearby which served small glasses of local wine so that it is easy to sample many different wines. Markus had a more discerning taste than I. I thought all the wines were pretty good.

The next day I found Franka, a German woman who had just finished high school and was on an extended trip by bicycle. Her English was excellent. We spoke almost entirely in English. She rode an ancient Motobecane which she bought for about fifty euros and restored it herself. She worked in a bike shop for a few months and learned lots of skills. She laughed that even with the experience, she will sometimes still puncture a new inner tube when installing it.

Franka was familiar with Komoot and was amazed as I over its ability to sometimes find tiny paths through the woods. She taught me how to read the cycle way signs and navigate without Komoot or maps. She also was a WarmShowers member. She thought it was a great organization.

Franka had an interest in philosophy. She told me about Das Kapital, a famous book written by Karl Marx which is still quite relevant today. She was able to describe the concepts in some depth, all in English.

We got into Manheim, a big industrial city. This far upstream on the Rhein, the river is fragmented into many smaller rivers. In a city of Manheim there are lots of bridges, lots of traffic. It really became complicated to navigate using only the cycleway signs. However, Franka was able to find a cycleway that crossed the bridges we needed. It took some trial and error, but she remained confident and succeeded. I was impressed.

Franka planned to head south to Spain. Our paths split in Manheim. We said our goodbyes there with a challenge. I said I would probably get to Budapest before she got to Spain. We exchanged email addresses.

Heading south out of Manheim back into the German countryside, I noticed that my shifter was getting progressively harder to use. Then the cable snapped. At that point my bike became a single speed bike. Normally I carry enough spare parts to fix a problem like this. However, the Rohloff system is new to me. I was uncertain about what to do.

I booked a nearby hotel. I rode the bike for three miles to the hotel. Fortunately there was a bike shop close to the hotel. I spoke to the owner as he was closing up shop late Saturday afternoon. He did not have a mechanic on duty. But he gave me a shift cable and said the mechanic would be available on Monday morning.

I emailed Dana. He replied that I could probably fix it myself, but I would need some tools I am not carrying with me. So here I am in Schwetzingen for an extra day. It’s not a bad place to get stuck. I have time to catch up on my blog.

One thought on “Further South through Germany”